The other day, a neighbor asked me to add hanging hooks to the back of one of my windows, a 12” x 12” peace sign which he commissioned as a gift for his pre-teen daughter last Winter.  When he handed it to me, I noticed that one of the pieces of glass had sustained two cracks. If a window is going to crack, its usually during, or soon after soldering, not after any length of time.  I was puzzled. 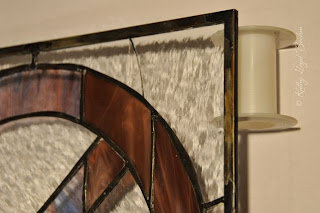 Later, I asked his daughter how it happened. Her reply was “It’s a long story”.  She may have dropped it, or something heavy fell on it, I’ll never know. But that’s OK, my task was then not only to affix the hooks, but to repair the glass as well ... I couldn’t bear to return it to them in that condition. 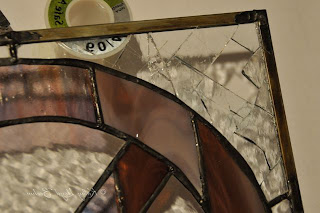 Next, carefully tap on the glass to break it into smaller pieces.  Be sure to wear safety glasses ... bits fly everywhere. Then gently remove each piece using needle-nose pliers.

Once the broken glass is removed, make a template of the opening and cut a new piece of identical glass, in this case, clear rough rolled. Then, using a soldering iron, loosen the copper foil that was around the broken piece.  Using the pliers, remove the old foil from it, as well as from the adjacent pieces. Then use “GooGone” to remove all the old adhesive from the foil.  Clean thoroughly. Re-foil the adjacent pieces as well as the new piece. 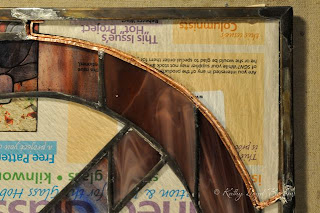 This repair was tricky because it was in the corner. I had to cut the glass slightly smaller to fit the space, then push it away from the adjacent glass and toward the corner, so it would catch inside the channel (metal frame).  This resulted in a slightly wider lead line than I prefer to have, but it was the only option.  After soldering and patina-ing the repaired piece, I affixed two hooks to the back by lightly sanding the upper back corners and soldering them on. 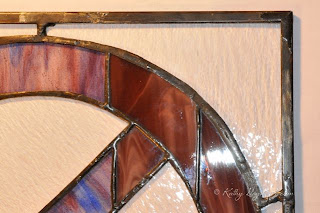 It took just over two hours.  My neighbor was pleasantly surprised. I turned down his offer to pay for the repair (which I did as a favor) ... but when I looked outside later, he had cleared the snow from our driveway and porch … Cool!

Have a broken stained glass window piece that needs repairing?  Have an idea for a custom window?  Please call or email me ... Click here for Boehm Stained Glass Studio website.
Posted by Kathy Lloyd Boehm ... at 9:00 PM No comments: Links to this post