In this post, with photos and narrative, I'll show the repair of a pretty 18" candle holder made with clear bevels.  Its mate is shown above it, a smaller version of the candle holder which is in good condition.  I used this as my construction guide for the repair.  The candle holder came to me in pieces as shown below.  Over time, the copper foil lost its adhesiveness and the item eventually collapsed. (Click on any photo to enlarge). 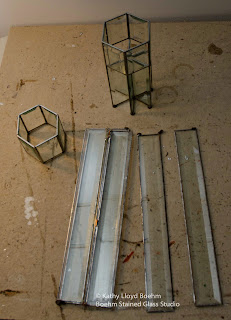 The candle holder is soldered at the center of the "star", or the point where the six long bevels join.  It is also soldered at the top of each bevel, where it meets the seam of the holder on top.  Since the foil on the center side of each long bevel had deteriorated, I first removed all of that.  Some of it came off easily by hand .. 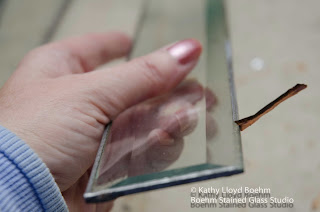 Some of it had to be pulled off with needle-nose pliers ... 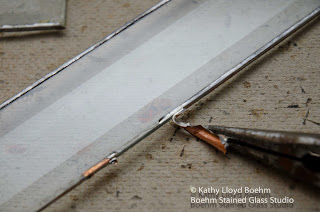 And some of it had to be removed with a razor knife. 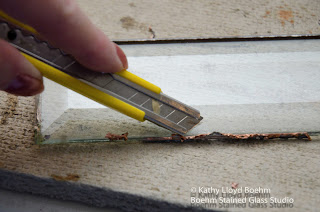 After all the old foil was removed from the center side, I removed most of the old adhesive using Goo Gone.  It took about 3 applications and some rubbing to get it loose enough to remove. 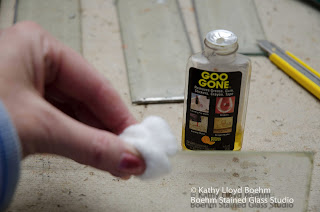 After the Goo Gone worked its magic, I went over the areas with a clean paper towel.
Since this solder on the candle holder remained silver, I used silver-backed foil.  As shown, the self-adhesive foil is then placed in the center of the side of each bevel.

Then the copper foil is flattened to the glass using a flexible plastic wand or "fid". 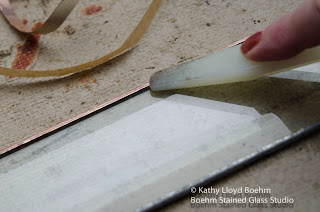 At this point, all the interior sides of the long bevels have been re-foiled. 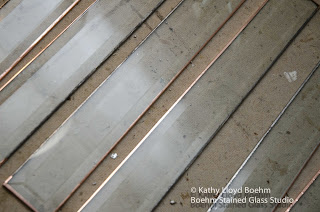 Below, I've marked each bevel with an arrow to indicate the new foil. 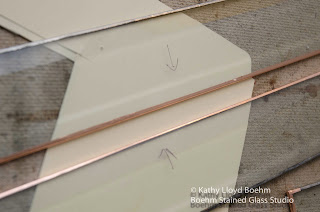 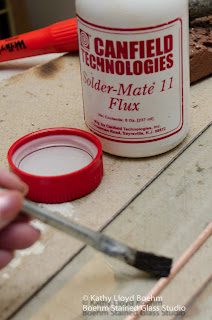 Here I'm "tinning" the borders.  This is a simple process whereby you can use those old beads of solder or flakes from other projects.  Just touch the hot soldering iron to the bead until it melts and "paint" it over the foil. 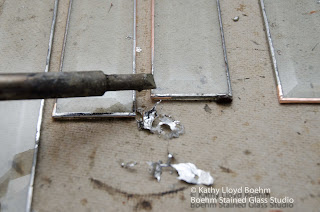 Three dimensional objects such as this are always a challenge because you must figure out a way to re-construct the piece temporarily which will allow you to solder it on a horizontal plane.  Below, I used the "good" candle holder to make a cardboard template to show the spacing of the long bevels relative to each other.  I then cut out the triangles. 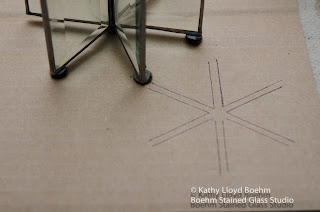 At this point, my ingenious husband took over and, using my triangle templates, made a custom holder out of balsa wood. 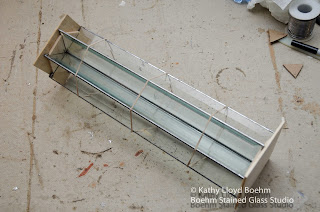 See below how the bevels are held in place with triangles of balsa wood which are glued to a square base.  Three rubber bands serve to strengthen the piece temporarily while I complete the soldering process. 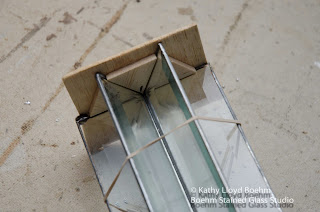 With the balsa wood supporting frame in place, here I'm adding a bead of solder to the inner part of the "star" formed by the long bevels.  Notice that I'm using a much smaller soldering iron now, which is better suited for the deep, sharp angle I wish to bond together. 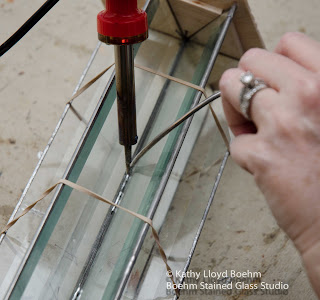 After I soldered the inner joints of the candle holder, here it is, standing up beside its mate. 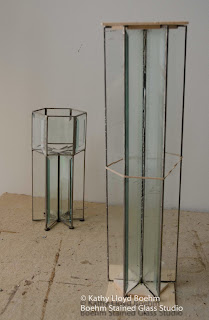 Below I'm joining the top piece of the candle holder which is made of 3" bevels.  Each of the corners are soldered in turn around the top of the piece. 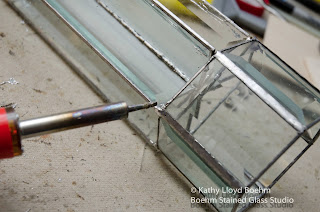 For added strength, I'm adding more solder to the center of the star, top and bottom. 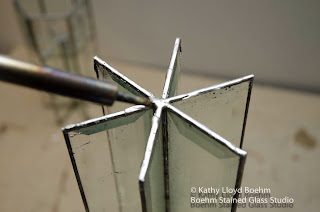 Then, the entire piece gets a careful wash in the utility sink, using powdered cleanser and an old dish brush.  This process washes away the caustic flux and any stray solder which may have landed on the glass. 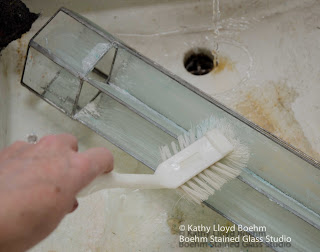 After the piece has dried, I applied stained glass finishing compound (a light wax) to the newly soldered areas. 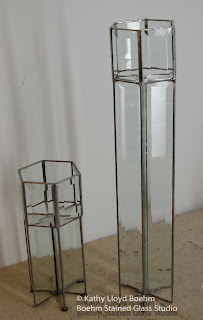 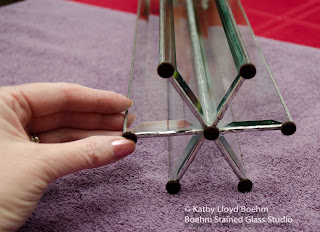 This was an enjoyable repair and something a bit different than the usual lamp or window.  Thank you Nancy, for entrusting it to my care.  I appreciate it and hope you will now enjoy it for many more years to come!


Please visit my website (click here). Its now smart phone compatible!  And if you are on FaceBook, become a fan and I'll keep you up to date on all my stained glass projects.  Call me any time .. 201-600-1616 or email with you questions. Thanks!
Posted by Kathy Lloyd Boehm ... at 10:45 PM No comments: Links to this post

This lovely little lamp had a tussle with a curious cat and came out of it with 5 cracked pieces.  Below, with photos and narrative, is the story of its repair.  (Click on any photo to enlarge).

Here's a lovely thank you note!


Hi Kathy,
I just wanted to send you a note to tell you how pleased I am with the repair of our lamp; it looks absolutely beautiful!!!! I do not know if Frank told you but it has sentimental value to me & I was very upset when it got broken. Thank you so much for the wonderful job!!!!!!
Cookie

If you have a copper-foiled lamp or window that needs repairs, now would be a great time to call me at 201-600-1616.  We'll begin by looking at your emailed photos so I can assess the damage and give you a no-obligation quote.  And if you have an idea for a custom window, by all means, let me help by recommending patterns and glass to get your project underway.

Please visit my website (click here). Its now smart phone compatible!  And if you are on FaceBook, become a fan and I'll keep you up to date on all my stained glass projects.  Thanks!
Posted by Kathy Lloyd Boehm ... at 4:53 PM No comments: Links to this post