These large fruit lamps are wonderful nostalgia from the 1970's .. Each one is unique but in a similar style and construction.  This lamp sustained damage to four of the pears along the side, as well as cracks to the top, and two cracked pieces in the crown.  Two of the remaining pears were not damaged, but were very loose and had to be re-soldered. Here's how I went about repairing the lamp.  To see more Fruit Lamp Repairs, click here.  (There are 8 others posted)

Here's a photo showing a missing pear at left of center, and another on the left side, as well as cracks in the crown. 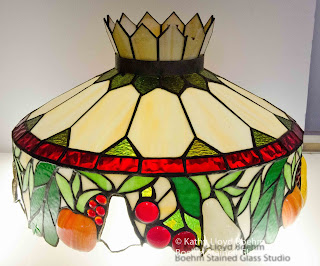 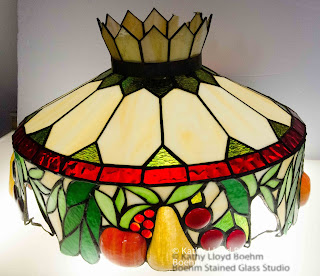 Here are the two crown pieces which were cracked. 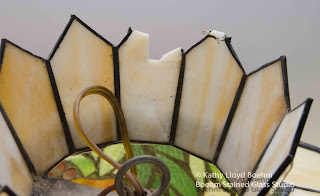 And here is a top panel which is also cracked. 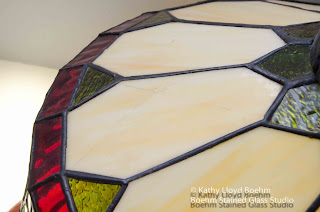 Here's an opening left by a missing pear.  In order to prepare for the replacement, I have to melt off the old solder and copper foil around the entire border of the opening. 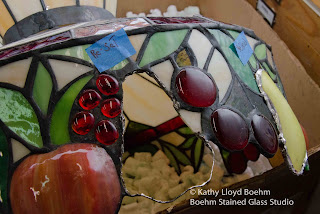 Here's the new replacement pear.  These arrive to me with rough edges.  I always run them through the grinder.  This makes them safer to handle and also enables the copper foil to adhere much better. 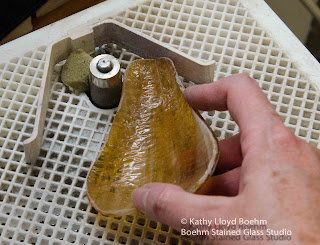 Now the replacement pear is in place and soldered.  Notice that I've also replaced the yellow pear on the right, using the same procedure. 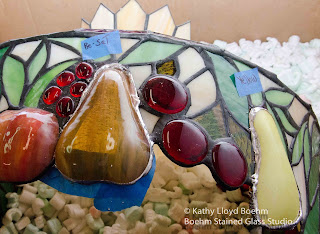 Here's a pink pear which I've grinded.  I've also applied copper foil and its ready to be replaced into the lamp. 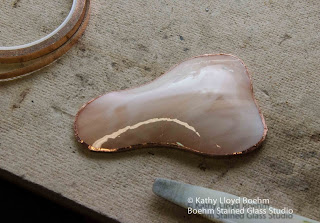 With many older lamps such as these, the original artists did not ground the edges of the glass before applying the copper foil.  Whenever I find this, I take time to hand-grind the glass with the tool shown, for the reasons mentioned above. 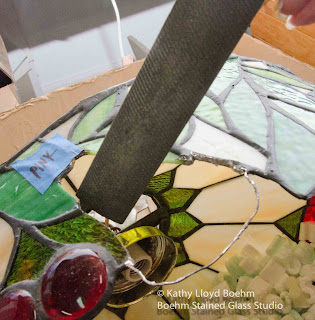 Here's the pink pear in its place, with new copper foil around the border, as well as around the pear. 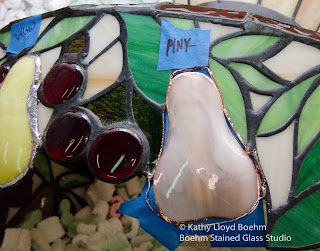 At this point, I've soldered in the pink pear and I'm pulling out the cracked pieces of the nearby leaf, using needle nose pliers. After I removed all the green glass, I melted off the bordering solder and foil, made a new pattern, cut a new piece of green glass, grinded it, applied copper foil, set it in place, and soldered it in place. 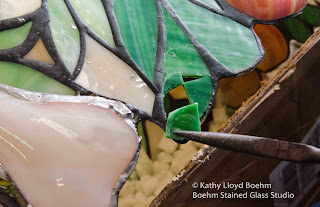 Now all six pears have been replaced.  Now I'm matching the glass which is in the top part of the glass.  As shown earlier, one of those pieces sustained a large side-to-side crack. 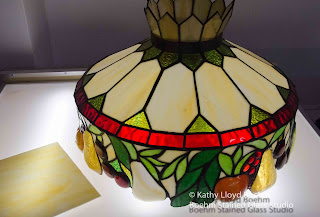 Working now on the cracked top panel by pulling out the broken pieces.  After this is done, I pulled off, and then melted off all the old solder and foil from the borders. 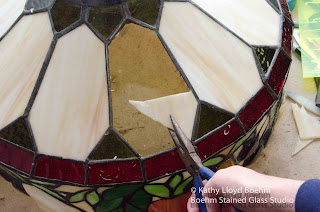 I made a paper pattern of the opening, cut the new glass, grinded it, foiled it, and put it in place as shown. 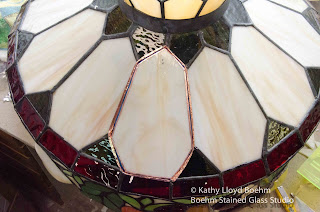 And here it is soldered in place. 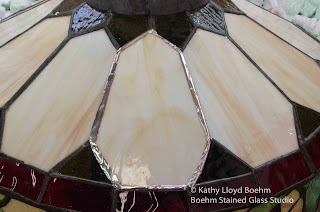 Here I'm applying black patina to the solder.  Its the turquoise liquid in the cap.  It reacts instantly with the metal. 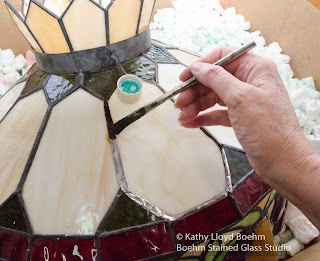 Then I'll go around the lamp and solder all the pears as shown. 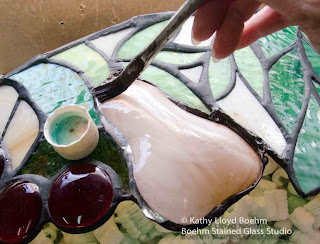 After the remainder of the lamp was repaired, I moved onto the crown.  I made another template for the two pieces which needed to be replaced.  Then I traced them onto the matching glass as shown here. 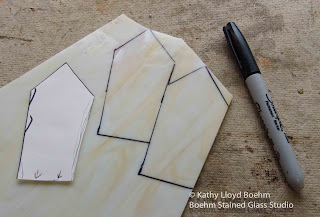 Using the back of the glass cutter, I'm tapping out the two cracked pieces from the crown. I'll pull out the glass using needle nose pliers, and then remove the solder and foil from the borders. 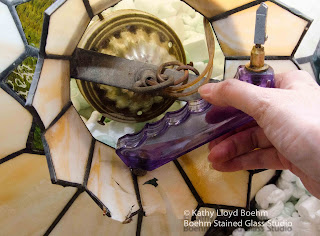 Here are the two new pieces in the crown.  After they were in place, I soldered and patina-ed them so that they match the rest of the crown. 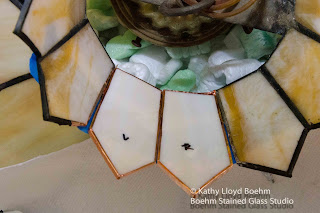 Here is the repaired fruit lamp .. 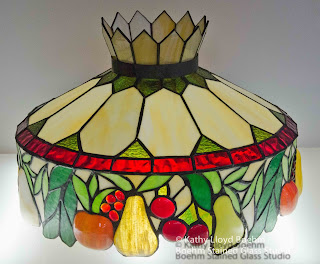 Another photo showing another side of the repaired lamp.  Thank you June and Fred, for taking time to travel up from South Jersey to drop off and pick up your lamp.  We hope your son will enjoy this in his home for many years, as you've enjoyed it.  All the best! 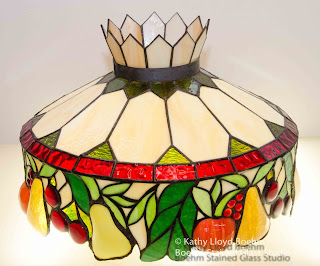